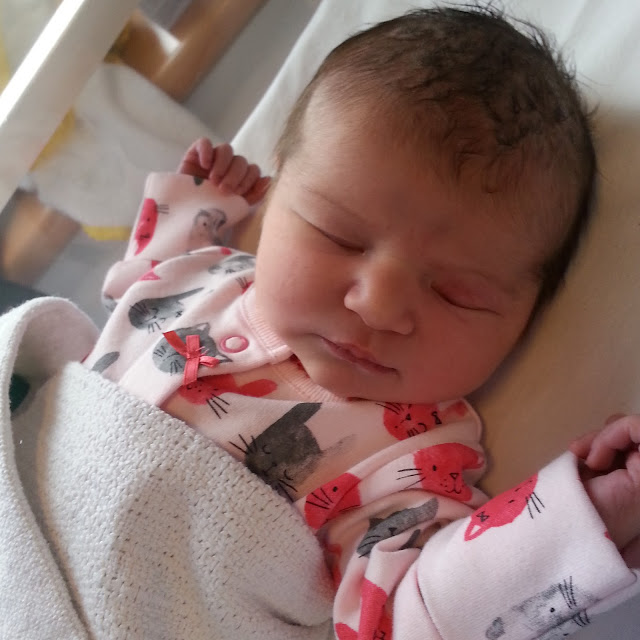 Posted by imacarrot at 08:47 No comments:

Player 3 has entered the game!

So excited to finally reveal our big news!!

We had to do this in the ultimate geeky way of course so combined our love of video games with our announcement!

We are so excited about meeting our little Duckie in May next year! It's a bit scary to think its only 6 months away, but gives us a deadline to get the nursery sorted.

The nursery is currently my beloved shoe room. I have mourned the loss of my beautiful room haha!

We're having to have the biggest clearout known to man, getting rid of years of collectables, dvds, games and all manner of other randomness! We're not going to be those parents who change their personalities for their children. ...we just have wayyyy too much stuff!!

So excited to be a Mummy! Eeeeeep!!

Posted by imacarrot at 11:24 No comments:

This week I had to say a very sorry goodbye to a wonderful lady.

Her name was Doris Flack, but everyone knew her as the ever-lovable Squibbs! She was 102 when she sadly left this world, but what a 102 years they were!

She was born in London in 1911. She loved to dance and joined dance troupes who toured and performed everywhere!

I first met Squibbs when her daughter asked me to make a photo slideshow for her 95th birthday party. Her daughter, Gay, has been a family friend since I can remember so I agreed happily, thinking it would just be some normal family pictures.Then the photo albums arrived.

They were filled with signed pictures of starlets and actors from the past 80 years, old theatre posters and hilarious images of Squibbs in her hay day. I was invited to the birthday party and couldn't wait to meet her, though knowing she was 95 I figured she her spirits might have been dampened as the years went by.

Squibbs did not disappoint. She was wearing a purple suit with matching purple eye shadow and hot pink lipstick.  She giggled at the images, reminiscing and telling stories to go with the pictures. Sipping on her daily Guinness she told me one tale and getting caught out with 2 chaps in a car, in what could have been a dangerous situation for a girl on her own. When they tried to convince her to go astray she simply replied "F*** off" and walked home. I spat my drink everywhere because I wasn't expecting such an elderly lady to be so youthful!!

She had such an impact that I used her photo as one of my table pictures at my wedding. I had images of starlets from the 40s and 50s as table names and thought Squibbs belonged there too. This same picture was used on the funeral order of service.

I was invited to her 100th birthday party and made another slideshow for her. No duplicates were needed because she had so many photos to choose from. She thanked me in a lovely note and said it was like watching a film of her life.

What an absolute legend of a lady. She drank Guinness like it was water and even until the very end wore her hot pink lipstick and purple eye shadow. Instead of flowers my Dad asked me to make the family name cloud frames. Flowers slowly die, whereas these name clouds will last forever.

She was one of the most colourful, hilarious, lively, fascinating women I have ever had the pleasure to meet and this world will be a much emptier place without her presence. If I live to be even close to her age I hope I have the ability to be as fun, interesting and courageous as she was. As her great grand daughter said after her funeral service, the legend will live on, probably another 102 years! 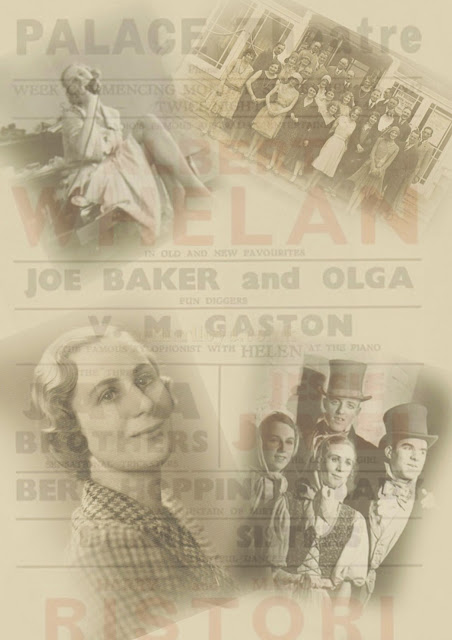 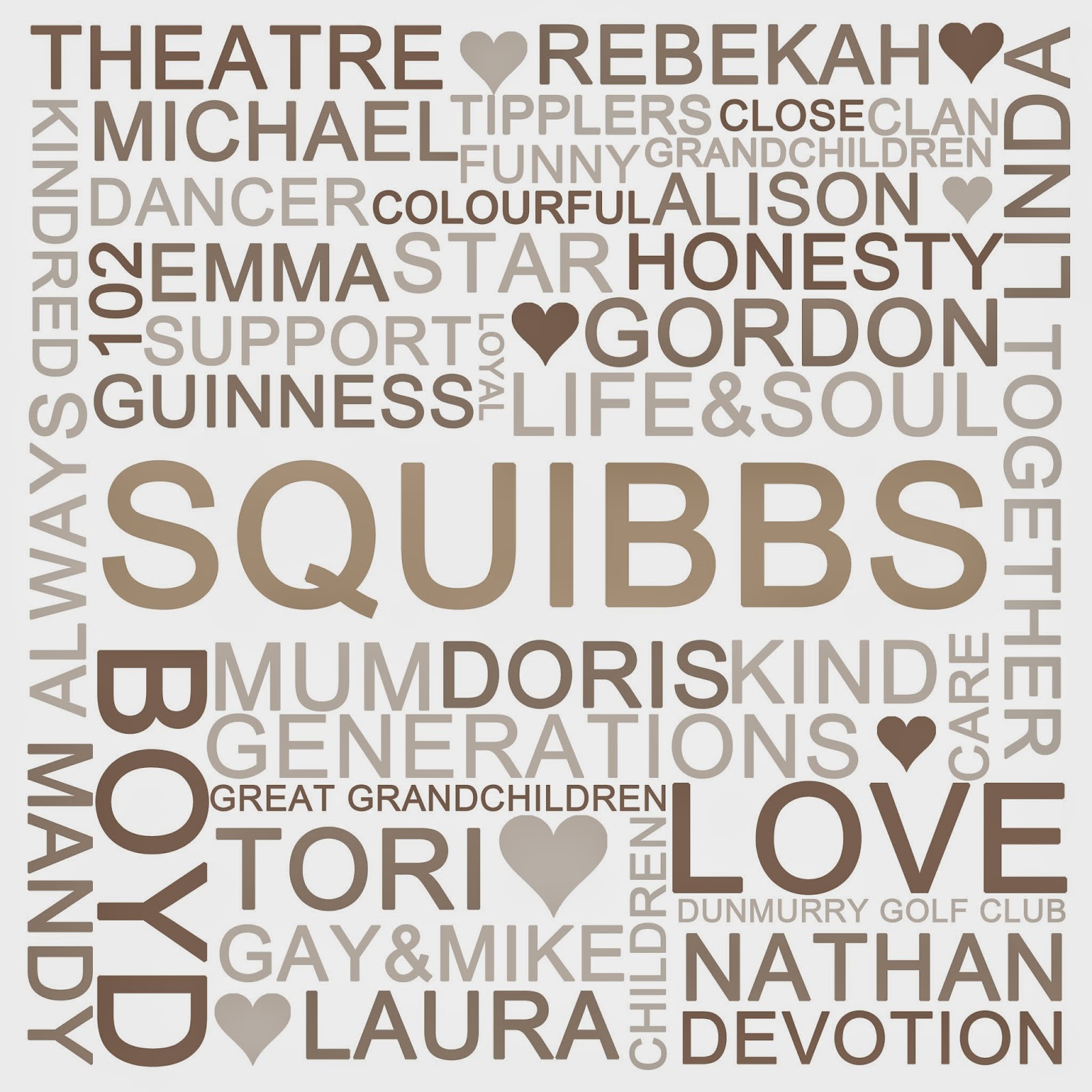 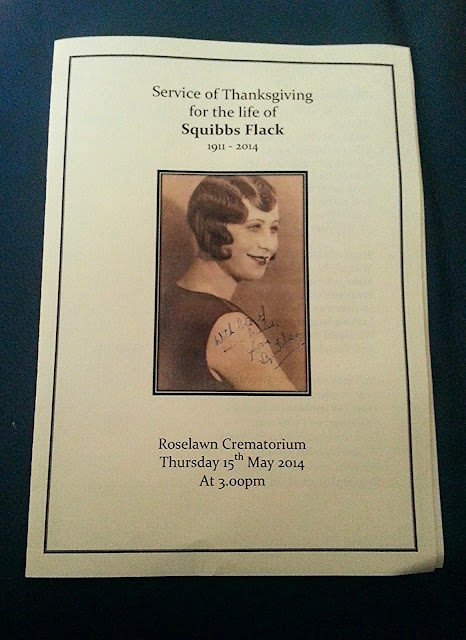 Posted by imacarrot at 12:52 No comments:

Wowee it's been a whole year since Lulu Makes Things was born!!

Can't believe time has flown in so quickly,  but as the cliché goes, time flies when you're having fun, and I really am!

I could never have dreamed my little handmade goodies would be so loved! :) it's a great feeling when someone buys one of my creations, especially when they're going to give it to someone as a gift!

I also love the fact that I still get to have a creative outlet. Coming from an environment where I used to get to design stuff all day, every day, to one which involves general admin work, was difficult to adjust to at first. I was worried I was going to lose my little creative spark at first, but then Lulu Makes Things was born and I worried no more!

It's funny looking back and seeing our sales from the first day compared to now. That day we sold 2 posters and a magnet and you would have thought we'd struck oil the way we reacted haha! Having someone buy something you made yourself is the most awesome experience, so the fact 3 people bought things was insane (at the time). Nowadays it's a different story. We have the stall laid out so everything can be seen and flicked through for ease, the branding all matches, we have official price signs(not bits of card scrawled on with a sharpie) and if we don't get at least 2 pages of sales in our little sales book, it's been a quiet day!

Looking at pictures of our stall then and now makes us giggle.  We hadn't a clue how to display the bunting so people could pick out their letters and I hadn't dreamt up even half the creations we have on sale now!

Love my little company and love my wonderful family for being so supportive throughout the process. My poor Dad still drives us to st Georges market every Sunday (I have a fiat500 so could fit about one box in the boot haha).

Also have to thank all our wonderful customers, without them we would have been another fading face at the market like we see coming and going every week!
So excited for what is coming next and can't wait to see where we'll be this time next year!! 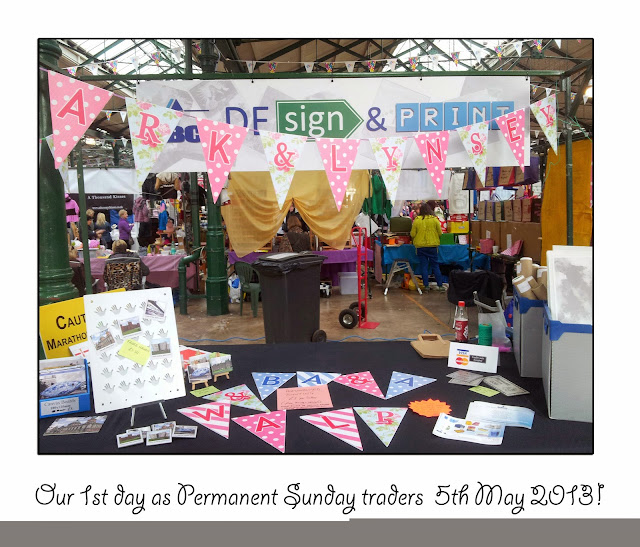 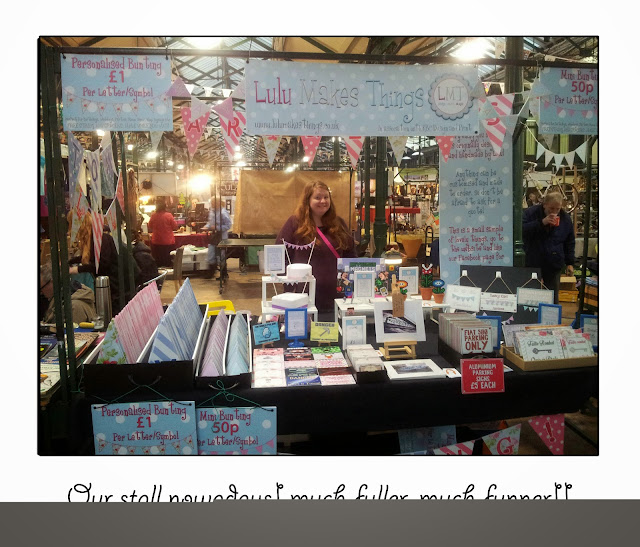 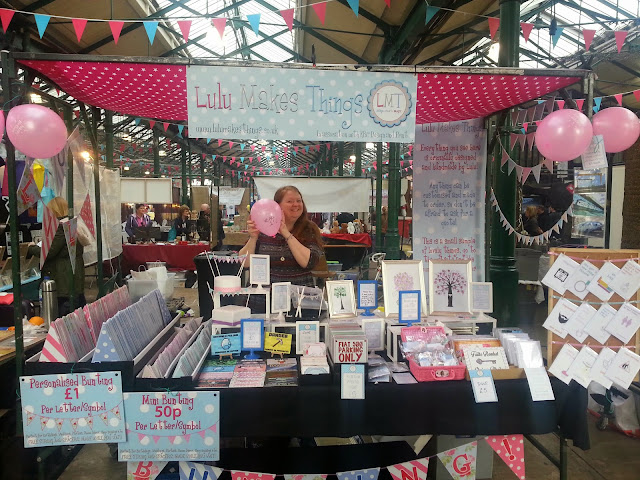 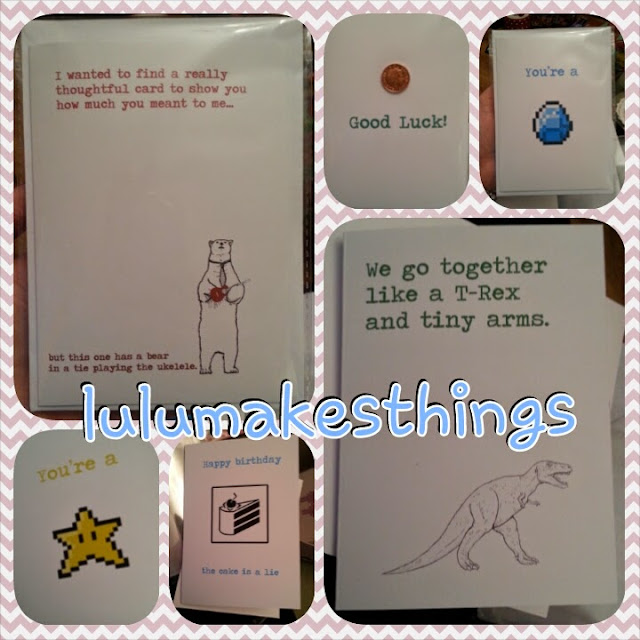 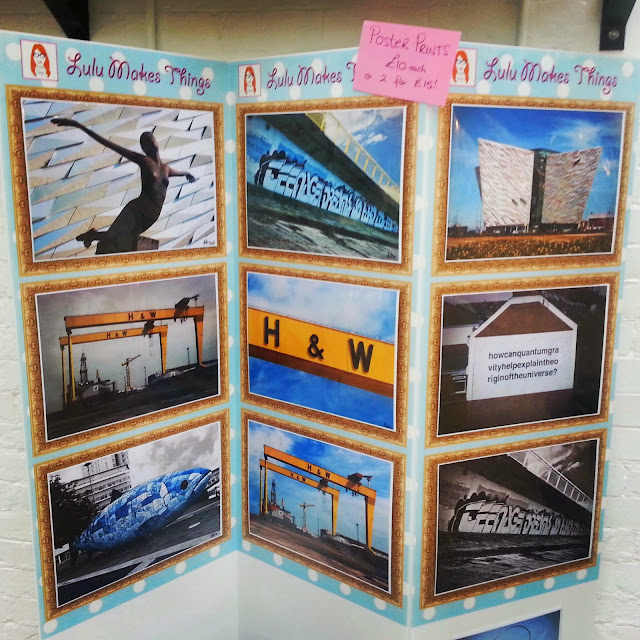 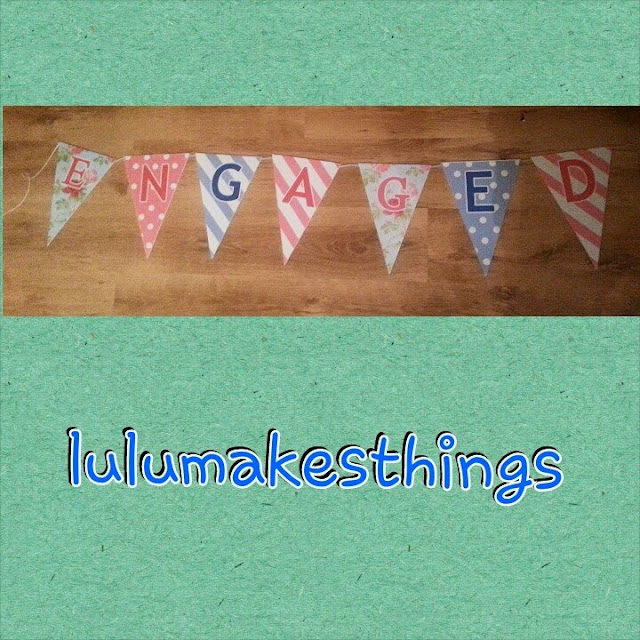 Posted by imacarrot at 04:39 No comments:

This week I launched a new product with Lulu Makes Things, a finger print guest frame!

It's such a cute alternative to a traditional guest book and relieves the pressure on your guest to try and come up with something witty or meaningful off the cuff!

Each guest pops a finger or thumb print onto the tree as a leaf or the bicycle as a balloon and then writes their name beside it. A really lovely memento to display after the day too!

I was nervous to launch this as it's something I've been playing around with for ages, but was overwhelmed by the postivity of everyone's response!

I sold out of trees within a few hours and everyone loved the concept! I love being able to launch things and get instant feedback.  Sometimes things work right away, other things take a few weeks to get going and other things just never make it. It can be surprising the things that people love, like my little greeting cards! I never thought people would love them so much because most if not all of them are personal to me and my sense of humour.  A french lady bought a whole pile of them on Sunday so it's pretty cool to think I have a French mind twin!!

Going to work my butt off this week to make lots of new designs this week. 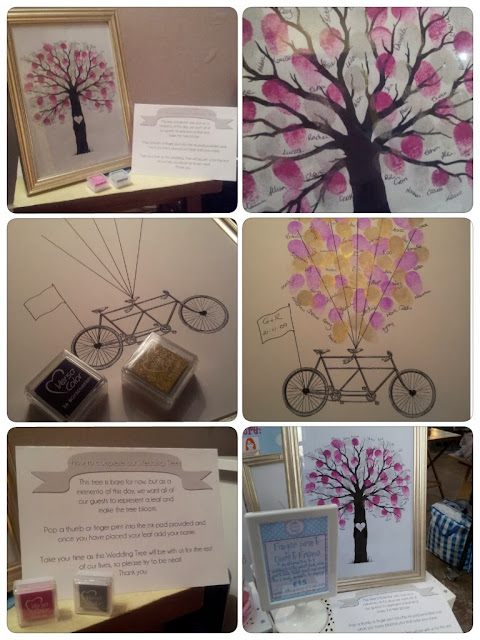 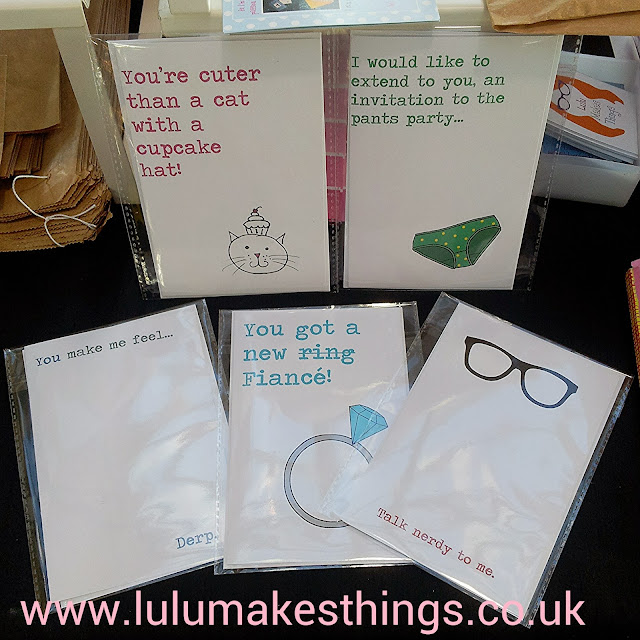 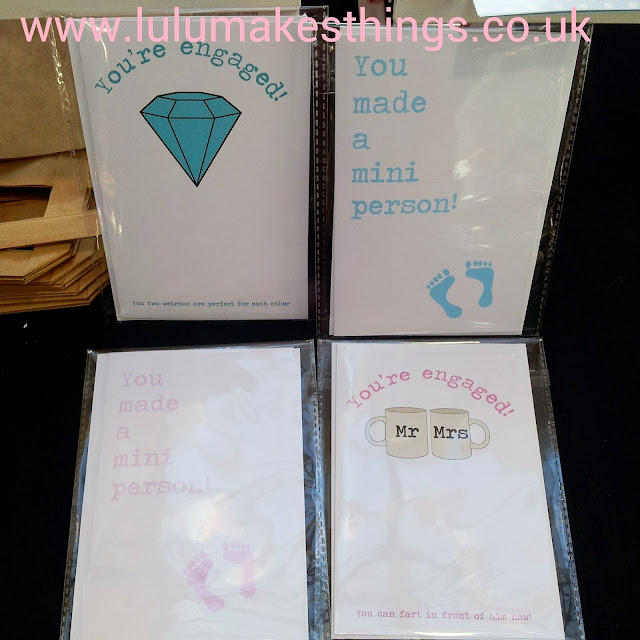 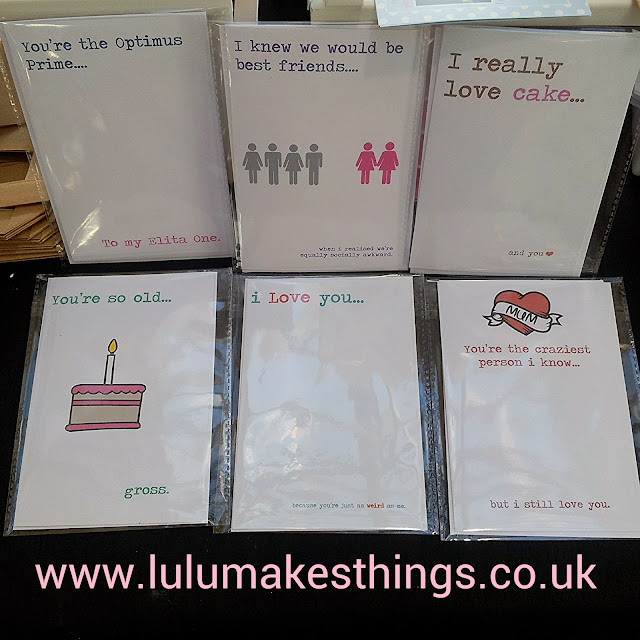 Posted by imacarrot at 14:20 No comments:

I'm not the biggest fan of greeting cards. This is because most cards I have recieved are clichéd and impersonal.

Occasionally a card arrives usually from a close friend or family member that I love, and this one usually ends of being framed or staying on display on a shelf forever!

I decided I should create my own version of typical greeting cards and trialed a few samples at my Lulu Makes Things stalll at st George's Market last week. The response was insane!!

I had so many people laughing and bringing friends over to see my little creations! I have never felt so flattered! It was such a lovely response but being the socially awkward creature that I am, I pretty much looked like a tomato all day witj a big red face (or beamer to those from good old norn iron!).

This week I made a tonne more! I like making funny cards that are a bit weird haha! There are so many fellow weirdos out there just like me so I know things that amuse me will amuse them too!

Why give an ordinay greeting card when you can give a weird one! The one that's proved most popular so far is the cat in a cupcake hat with my drawing of a cat! Who knew I had such artistic talent Hahahaha 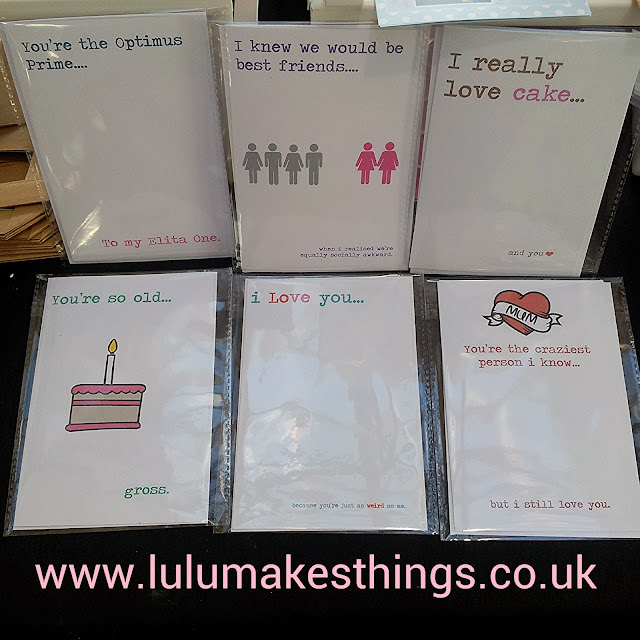 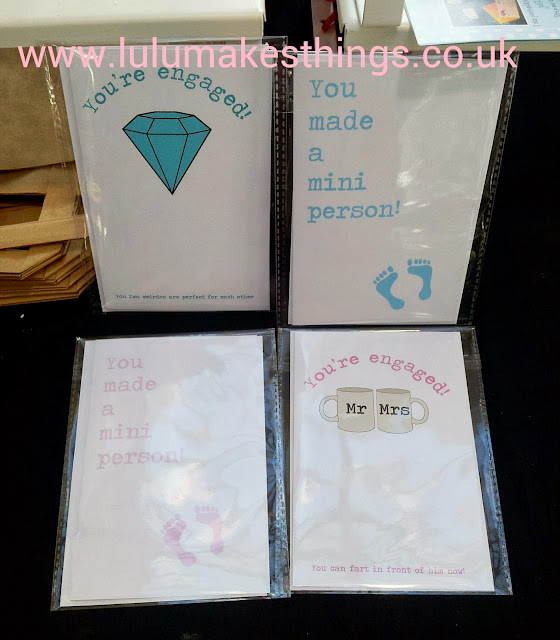 Posted by imacarrot at 06:19 No comments:

If you're looking for an inexpensive way to give your favourite person a token of your love, then look no further than these super cute bookmarks!

All you need to do is go to your local DIY store, raid their paint sample card supply and you're pretty much set!

I used a little heart cutter to punch out hearts up the side and bottom fpr the ribbon, but a hole punch works just as well! Heart punches are available in most craft stores for around £2-3 or online for a little cheaper!

Perfect craft idea for kids too due to it's simplicity! Hope you enjoy! 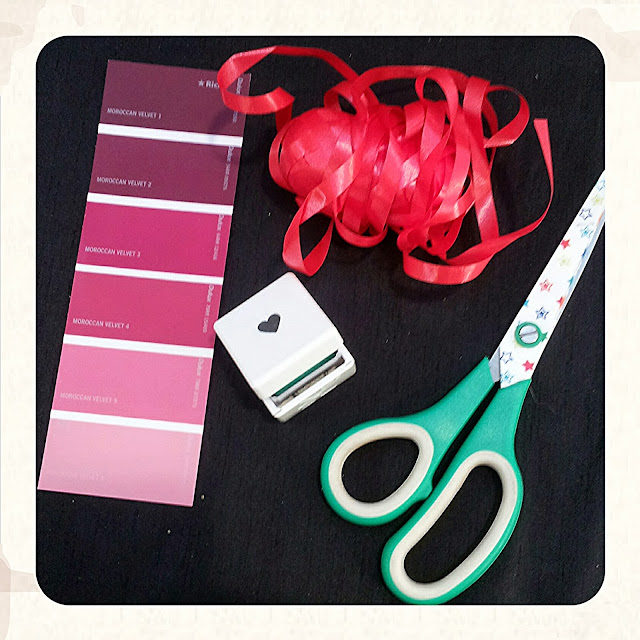 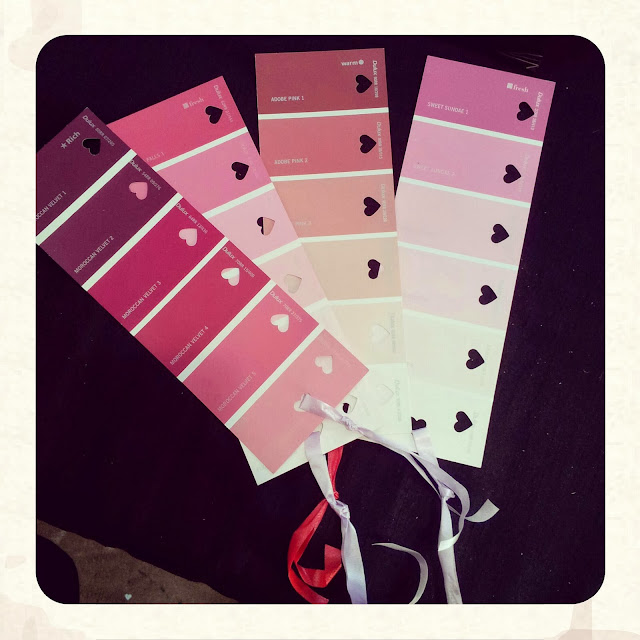 Posted by imacarrot at 07:28 No comments:

imacarrot
I'm a collector of all things shiny, pretty and vintage. I love photography, design and anything creative. The crafter behind Lulu Makes Things, Belfast, Northern Ireland